Manufacture and sale of Ohitsu
(wooden container for rice)

Edo ohitsu, other sizes are here

One the rice has been cooked, transfer it to the ohitsu as it is.Just by putting the cooked rice in the ohitsu and its deliciousness can be preserved.When cooked rice is stored in a rice cooker, the surface may become dry and the rice become hard after half a day has passed. However, an ohitsu adjusts the moisture of the whole batch of rice, so it can preserve the moisture of the rice deliciously for around half a day.
Once you’ve finished using the ohitsu, using a sponge, wash it off with water (cool or lukewarm).If possible, we recommended rinsing it off with hot water afterwards. Dry it off in a shaded, well-ventilated area.
※ Take care not to leave it face down, allowing the open-end to face upward.

A few tricks to make it last longer! Taking Care of your Ohitsu 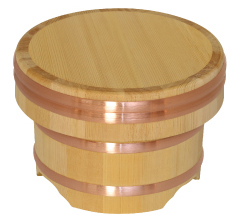 Why rice out of an ohitsu is delicious

Of course, rice preserved in an ohitsu will gradually cool down.
However, even after cooling down, it will release, little by little, the moisture which the wood absorbed while the rice was warm, preserving the moisture content of the rice, keeping it delicious.One could certainly keep the rice cooked overnight in an ohitsu, and have it tasting good until the next morning.We further recommended using it for Bento, as its ability to preserve the rice’s taste pales in comparison to a rice cooker.If the surrounding environment is good, you may be able to keep your rice good for about 2 to 3 days.
Rice with the slight fragrance of wood is delicious even when it has cooled down.Once someone tastes rice out of an ohitsu, it leaves a lasting, unforgettable impression.

Saving and economy by using an ohitsu 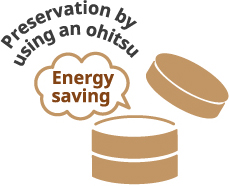 We sell sushi okes, Handai, Hangiri, okes, wood baths, and other manufactured wooden products.
Please feel free to contact us about any repairs or any other concerns.